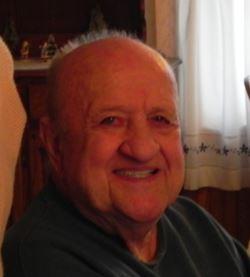 Joseph Edward Schillig, age 92 of Louisville, Ohio went home to be with the Lord on January 24, 2022.  He was born February 15, 1929, to the late Curtis and Louise Schillig.  On August 23, 1958, he married his loving wife, the late Veronica Ottle Schillig. Joe attended Kent State University where he obtained his Master’s Degree in Education.  He retired from Louisville High School where he was an Industrial Arts teacher.  Joe was a lifelong active member of Sacred Heart of Mary Church in Harrisburg.  Joe loved playing and umpiring softball.  He took great pride in maintaining the ball fields for Sacred Heart of Mary.  Joe will always be remembered for his sense of humor and willingness to help anyone when needed.  He was exceptionally proud of his large vegetable garden and loved sharing it with family and friends.