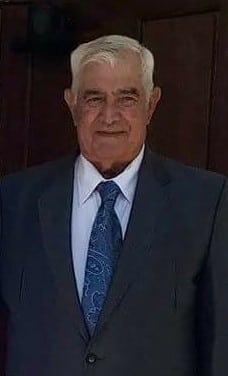 James Francis Monter, age 86 of Cabool, Missouri passed away peacefully in Paris, Ohio at the home of family surrounded by his loved ones on August 24th at 3:00 pm. He was born in Alliance, Ohio on September 6, 1931 to John Edward and Margaret Josephine (Haidet) Monter. Jim graduated as class president from Marlboro High School in 1948 and was voted by his classmates as the most likely to become a movie star. He served as a forward observer in the U.S. Army during the Korean War from 1951-1953 having achieved the rank of master sergeant of the 3rd Battalion, 54th Artillery Division. He was married in 1954 to Martha Jean Ridgeway at Sacred Heart of Mary Catholic Church in Harrisburg, Ohio and raised six children. He remarried in 1984 to Janis M. Reis in Pennsylvania.

Jim had a great love of farming and dedicated his life to the dairy industry. He was one of the first members of the American Holstein Association. From a very young age he always had a passion for animals, whether helping his grandfather or working on neighboring farms. He began as a local milkman and worked for NOBA (North American Breeder’s Association) for many years helping other cattlemen develop excellence in their breeding programs. He began his own farm in Paris Township, Ohio in 1960. In 1988, Jim and his family moved the entire dairy operation including cattle, horse, & dog to Cabool, Missouri and continued milking until he sold his herd in 2001. Jim loved showing off his prized cattle at state and local competitions obtaining an attic full of trophies and ribbons throughout his life. In 1998, The Missouri State Extension Office noted that Jim had bred and owned more dairy cattle with an excellent classification than any other dairyman in the state. He continued farming for himself and helping his neighbors until his passing.

After retiring from milking cows, he continued his love of horses including Quarter Horses, Haflingers, Missouri Fox Trotters, and Tennessee Walkers. He loved taking his team on trail rides and often volunteered his time giving rides at the Cabool Farm Fest. For many years, Jim and his team carried the Parade Marshall at the Cabool Christmas Parade, and in 2017 was given the esteemed honor of being selected the Grand Marshall.

Mass of Christian burial will be celebrated at St. Joseph Catholic Church in Maximo, Ohio on Thursday, August 30, 2018 at 11:00 am, officiated by Father Joseph Ruggieri. A bereavement luncheon will follow. Jim’s family will receive friends at Paquelet-Falk Funeral Home on Wednesday, August 29, 2018 from 6:00 – 8:00 pm. In lieu of flowers, please make a donation to Cabool High School FFA, c/o Stacy Monter, 925 Pine Street, Cabool, MO 65689. A memorial service will be held in Cabool at a later date.

“Your labor is done, your home now is heaven; no more must you wait,
Your legacy lives on, your love of the land, and we will close the gate.”
(Close the Gate by Nancy Kraayenhof).