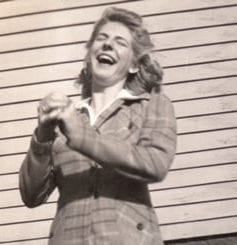 Dorothy Elizabeth Halter, age 96, passed away peacefully at the House of Loreto in Canton, Ohio on November 23, 2018. Born Dorothy Dudley on May 10, 1922 to Wilda and Jabez Dudley of Louisville Ohio, she was a 1940 graduate of Louisville High School. After employment during WWII at the former J&L Steel Corporation, Dorothy’s true fulfillment in life began in 1944 with her marriage to Glen Halter of North Canton, with whom she spent sixty-seven very happy years. She was active in the American Legion Auxiliary Post 548, Aqua Power Boat Club at Berlin Lake, St. Louis Catholic Church and School, and volunteered at Saint Thomas Aquinas High School and with the Louisville Board of Elections. She and Glen thoroughly enjoyed their annual travels to navy veterans’ conventions with his former WWII Navy shipmates. They spent later winters in Venice, Florida prior to Glen’s sudden passing in 2011. Dorothy‘s devotion and dedication was always to her husband and her family. She was happiest with a baby in her arms, in her kitchen surrounded by children and grandchildren, or working in her yard and garden. Her normally quiet and dignified manner belied her wonderful sense of humor. Those who knew her best would remember she loved music, played piano in her early years and sang on stage in high school.

Dorothy was preceded in death by her beloved husband Glen, one younger sister Caroline Dudley Masterson, and her parents.

The family wishes to extend its deepest and heartfelt gratitude to the Sisters of the Divine Spirit of Canton’s House of Loreto, and the special nurses, aides and volunteers of it’s ‘C’ wing for the extraordinary care and love they showed to Dorothy for the past six years. The family plans to hold a celebration of life at a later date.

Memorial contributions may be made in Dorothy’s name to the House of Loreto, 2812 Harvard Ave. NW, Canton, OH 44709. Messages of condolences to the family may be addressed to the Paquelet-Falk Funeral Home, 303 S. Chapel St., Louisville, OH 44641 or shared online at www.paqueletfalk.com.